Strong and Bold: Resilience in the Face of Adversity

In July 2016, at an event presented by Richmond Football Club and A.G. Coombs, four special guest speakers will deliver their influential stories in what is set to be an evening full of admiration.

Without a doubt, Turia Pitt is one of Australia’s most admired and widely recognised people. Surviving against overwhelming odds is the least of her achievements; Turia has gone on to thrive in the ultimate story of triumph over adversity.

Earlier this year, Richmond Football Club’s Mindfulness Coach, Emma Murray, and her husband Nick, were faced with the news that their 14-year-old son, Will, was a quadriplegic. Emma and Nick refuse to look at Will’s situation any other way than apprehensively hopeful.

Richmond’s star forwardline player, Jack Riewoldt, may stand determined on-field at 6’4”, yet when he speaks of his cousin Madeleine Riewoldt’s passing in 2015 following a brave fight against bone marrow failure syndrome, emotion and an overwhelming sense of pride take over.

Join these four influential speakers at ‘The Park’, Albert Park, Melbourne, on Monday 25 July 2016 from 6.15pm, where they will tell their stories at this one unmissable event.

A.G. Coombs is proud to be a Presenting Partner of this very special event. 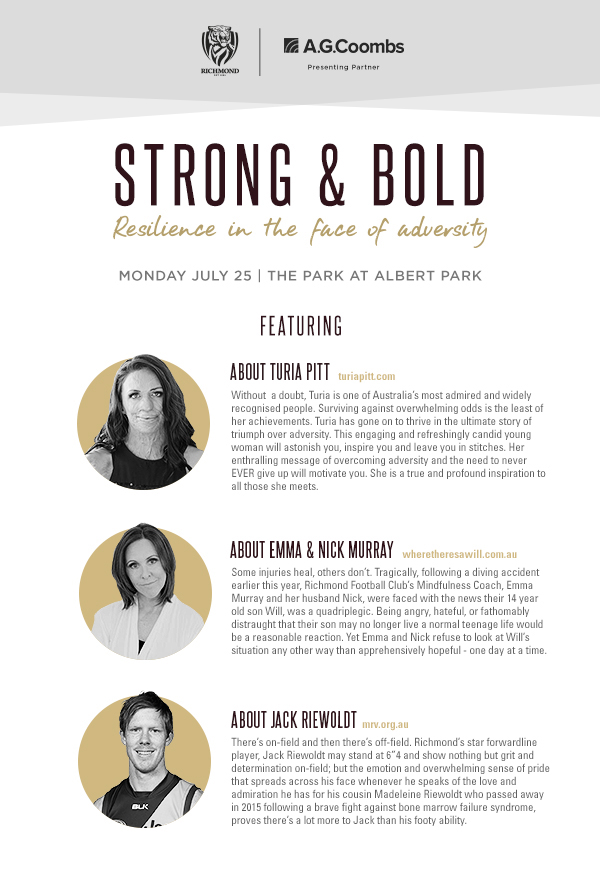 As part of A.G. Coombs' ongoing partnership with Richmond Football Club as official facilities maintenance provider and long time supporter of the Kor...

A.G. Coombs is pleased to announce an extension of our partnership with the Richmond Football Club into 2021. The A.G. Coombs logo will now sit proudl...